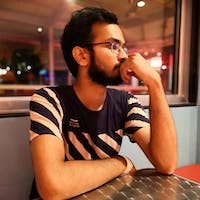 Synchronizing the same set of data across multiple servers is a common practice that is followed to ensure the availability of data across various servers. Data Replication is the process of storing data in more than one site or node.

Why do you need Replication?

MongoDB Replica Set is a group of MongoDB processes known as mongod instances that basically host the same data set. It is featured by one primary node, several secondary nodes for bearing data and optionally one arbiter node.

You can learn more about MongoDB Replica Set here

Let's begin with the deployment. We will be using Google Cloud's Compute Engine for creating VM Instances and the official MongoDB server binaries. We will be deploying 3 nodes (Primary + Secondary + Arbiter) on Compute Engine.

We need a minimum of 3 VM instances for Replica Set. Two of the VM's serve as Primary and Secondary nodes for data replication and third is the arbiter node. It is up to you to set the capacity for the VM's instances. For arbiter node, you can save a few bucks by setting low capacity (even GCP's free f1-micro instance gets the job done).

This article demonstrates deployment process for Primary + Secondary + Arbiter nodes but you can use the same process for deploying another Secondary node instead of Arbiter.

MongoDB defaults to 27017 port for connection. For our VM's to open this port we need to create a Firewall Rule.

In GCP console, Go to Firewall Rule under VPC Network and create a mongo-default-port rule with the following config. 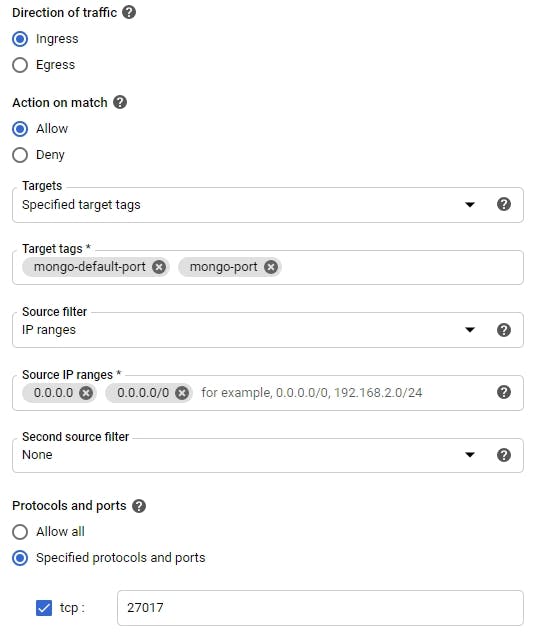 We are now ready to launch our Virtual Machines. In this PSA configuration, it is recommended to keep Primary and Secondary nodes of the same config, as in any point of time these two nodes can interchange Primary and Secondary positions. For the Arbiter node, you can opt-in for a low resource VM. In regards to Storage, it is recommended to use SSD. For more information about Hardware considerations read this

Here's an example VM for one of the primary nodes. 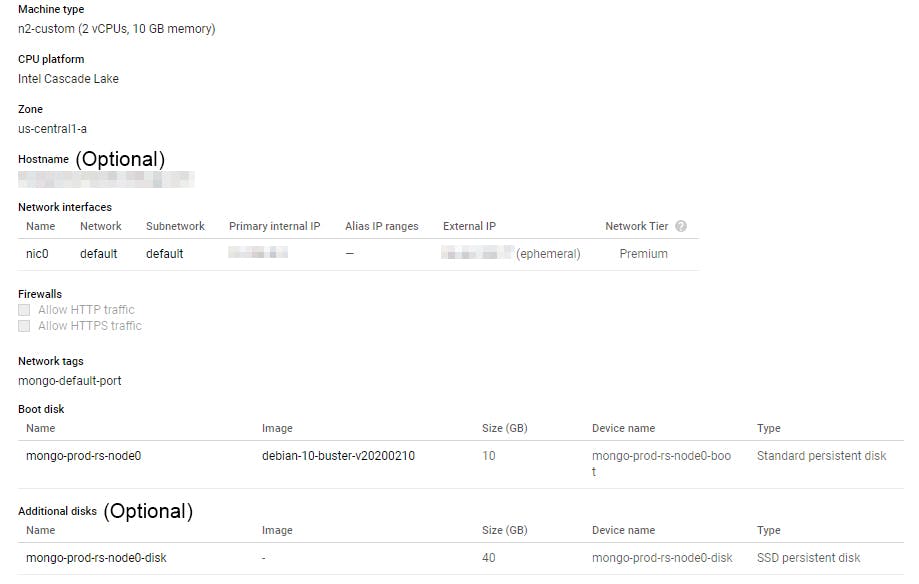 If you want to configure your VM for performance, now is a good time. One of the recommended steps for Linux server is Disable Transparent Huge Pages (THP). You can find a few more performance tweaks on the internet but be careful because every linux distro behaves differently.

You need to replicate the following process on all 3 VM's

Here's the official guide on installing MongoDB on Linux. Feel free to use any other community guides as long as it's downloading binaries from the official source.

By default, MongoDB will store the data in /var/lib/mongodb. If you wish to change the directory or if you are using external disk then you need to create a directory for that path.

We will be using keyfile authentication for this guide, but for a Production environment, you should consider using more secure x.509 certificates.

The keyfile contains a password/secret in plain-text. You can choose any password or generate a complex random string to store in the keyfile. We are placing the key inside /var/tmp so it is accessible to all users.

Use nano/vim to create the keyfile and type in your password/secret text.

Assign permission and ownership to keyfile:

MongoDB uses /etc/mongod.conf as startup configuration for mongod process. We can configure that file to support our Replica Set. You can learn more about mongod.conf here.

Below is the configuration file we will use in this guide.

Now, restart your MongoDB deamon (mongod) to let it start with latest mongod.conf.

Verify that the deamon has started successfully.

If the mongod process crashes then check out the debugging section at the bottom of the article.

We will be connecting our Replica Set with hostnames, this allows us to connect to our replica set using External or Internal IP.

We need to map our Virtual Machine's /etc/hosts file to each other with the hostnames pointing to other VM's Internal IP.

Similarly, you need to edit the /etc/hosts file on the rest of the VM's as well. You can even use the local IP 127.0.0.1 instead the Internal IP for the VM that you are currently logged into (current machine).

If you have a registered domain then you need to edit the DNS records to add A records pointing to VM's External IP. This will allows us to connect our Replica Set from the public internet.

If you don't have a registered domain or If you wish to not make the replica set available on the public internet then use any arbitrary domain name as hostname and on any system that you are using to connect to your replica set, edit the system's hosts file to point the hostnames to VM's IP.

Its time for us to initiate Replica Set and connect them to each other. SSH into the VM that you want as Primary node and connect to the running mongod.

Initiate the Replica Set on this node to make this a Primary node.

Check the replica status with

Once the node is in PRIMARY mode, you will lose access to any administrative commands used inside MongoDB. So lets create an user with DB Admin priviledges on the Mongo's default admin database.

and create the user with admin roles.

The above list of roles allows almost all the permissions that any admin might need but you can configure the roles as per your requirement. It is mandatory to keep atleast one user with clusterAdmin role to handle the Replica Set.

Now exit and reconnect to mongod with user credentials

you will be prompted to enter password. Now you can use any regular database commands. Whatever data you create now will be replicated by the nodes that we will add in the next step.

Adding other nodes to Replica Set

Setting the priority for members

We need to edit the default Replica config for setting the priority of our current primary node. Priority can be any integer. I'll recommend setting higher priority for the member you want as the first preference for Primary Node voting. In this case, we are going to set priorities as this:

As replica set currently only has one primary node connected, we will change its priority by reconfiguring the rs.conf()

Save the current configuration in a variable

Make sure you have 1 node present in members array and then set its new priority just like you would do in any other programming language.

Before proceeding to connect the secondary node, make sure its mongod process is properly running.

After exchanging a couple of heartbeats and syncing the data, the node should attain SECONDARY status in rs.status().

Similar to secondary node, we will now add arbiter node.

This node won't replicate any data and will be hidden to any read requests.

...and that's about it. You should now have a fully functional MongoDB Replica Set deployed on Google Cloud Platform.

Connecting to Replica Set from clients

From MongoDB 3.4 onwards, you can use the Mongo Connection String in shell command, example:

You will be using the same string in various client drivers like Node.js, Java and Go.

You can find the logs for crashes in the file specified at systemLog.path in mongod.conf. By default the path will be /var/log/mongodb/mongod.log. More info about log messages.

Replica Nodes not able to connect to each other

If you want to test the voting process of Replica Set then there's a helper method rs.stepDown() for switching the primary node. This method, when called on Primary Node, will make the node forgo its Primary status and trigger a vote between Replica Sets.